Three Weeks in Bali: Snorkeling and Dinner at the Ashram

Chapter 4. Snorkeling and Dinner at the Ashram

Early the next morning, as on most of the following days, Anya joined the yoga class taught by Karina. It felt delicious to stretch the remnants of travel weariness out of her joints and to breathe deeply. The air was still damp and slightly sticky from an early morning drizzle. She expected to taste slightly salty ocean air on her lips. Instead, she detected a trace of flower essence, a few molecules of fragrance from the frangipani trees. She thought again about those perfect, wax-like frangipani blossoms and how they would make a lovely shape for hand-made soap; “Made in Bali” engraved on the bottom instead of a “Made in China” sticker.
Her teacher’s gentle voice brought her back to her sitting on a yoga mat. “Notice what it feels like to be in this pose.” Anya took another deep breath, then banished her rambling thoughts with a new mantra: Bali. Here. Now. Bali. Here. Now. 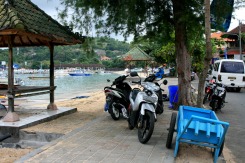 Sidewalk scene while waiting on boat

The day’s agenda included a snorkeling trip to a coral reef reserve. After a short van ride, a small boat took them to a reef where a number of other tourist boats were anchored already. The water was choppy and when the sun hid behind the clouds, it actually felt a bit chilly. Best to get moving! Everyone received fins and snorkeling masks. One by one, the women plunged into the ocean and followed one of the men who showed them the general reef area.
The reef was an intriguing under-water canyon landscape. Every once in a while, there was a colorful coral formation but mostly the coral was grayish. A few small schools of fish scattered between the snorkeling women. It was not the magical, undersea world she had expected. She had wanted to see bright colors and painted fish – just like the reefs she had visited in the Caribbean twenty years ago. Unfortunately, those reefs were dying and had been extremely disappointing when she visited there again a few years ago. She almost cried on that snorkeling trip off the coast of Tobago. The hotel manager had spoken about “world-class “ reefs here in Bali. Anya was hoping that the reefs up North were still healthy and in their full glory.
Slightly under-impressed, quite a bit chilled from the water, and stung by a jelly fish, she climbed back on the boat. After wrapping herself in an over-sized towel, she sat and waited for everyone else to return on board. Hunched over, trying not to shiver, she and Meera began talking. Meera was from India but had been living in the US ever since she came there as a student. She got married, had two kids who are now grown, got divorced and finally decided to live her life according to her own rules and preferences. She currently worked as a technical writer for an engineering firm in California and was looking to stretch her creative writing muscle on this Bali retreat. Like Anya, she had travelled a lot, and was full of curiosity about the world and different cultures. 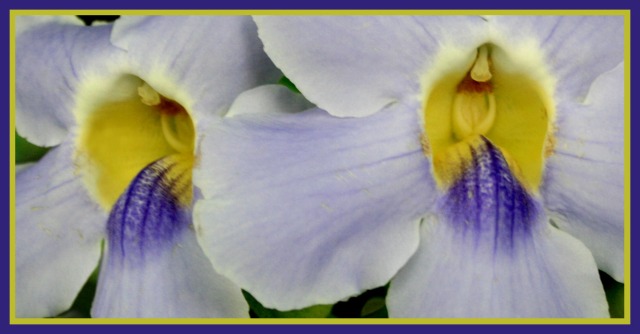 The two women talked non-stop, delving deeply into ideas and experiences. The word “Paradise” popped up. Did people come to Bali because they wanted to experience Paradise? There were so many visions of Paradise, Meera pointed out. For someone living in a city, the mountains can become Paradise; for someone living in a cold climate, a tropical place inevitably looks and feels like Paradise; for someone struggling to make a living, a mansion anywhere can look like Eden. Anya and Meera finally concluded that Paradise was only an imaginary place, or a state of perfection experienced in an actual place, for a limited period of time. Anya added that, inevitably, just like the honeymoon phase after a wedding had to come to an end and the couple had to return to their life of routine and recognizing their human flaws, Paradise turns into ordinariness or worse, when one stays there too long. 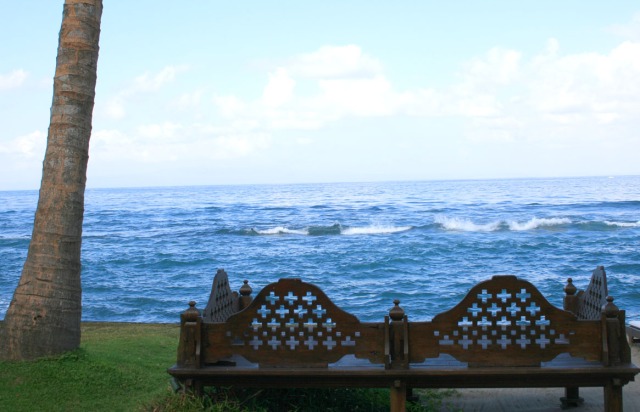 Then Meera came up with an intriguing thought: can any given place be transformed into Paradise, given the right attitude? And what would that look like? By now, the group had arrived back at the hotel and so the discussion had to be postponed for later. What was clear to both women was that they had found a friend for this trip, someone they could talk with deeply, and who was not intimidated by the other’s intelligence and range of knowledge.

Later in the afternoon, Janna, their tour guide, walked with them to an ashram in the town of Candidasa. On the walk to the ashram, they came across the Guardian of a bridge, several statues, and many family altars like these: 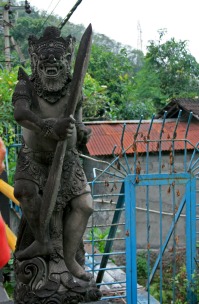 Bridge guardian on the road to the ashram 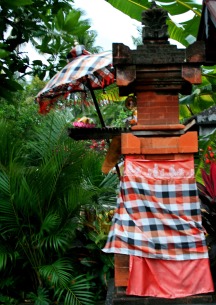 Family altar along the street 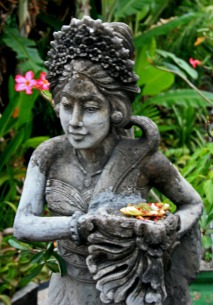 Statue on way to ashram
The Gedong Gahdi ashram was founded by the late Mrs. Gedong Bagoes Oka (1921-2002) whom Janna called “the strongest Balinese woman I know.” Janna had a dreamy smile on her face talking about her early time in Bali, when she lived at this ashram. Anya was wondering what made Janna leave there but then reminded herself that there is a time for everything – searching, wandering, homesteading, raising children. Each life phase is followed by another.
After Mrs. Oka’s death, her family and trusted friends continued the ashram which is open to visitors and has rooms for overnight guests. The ashramites pledged to follow Mahatma Gandhi’s principles which were printed on a sign near the entrance: regular communion with God, abstention from meat, alcohol, smoking and condiments, and love for the fellow man. 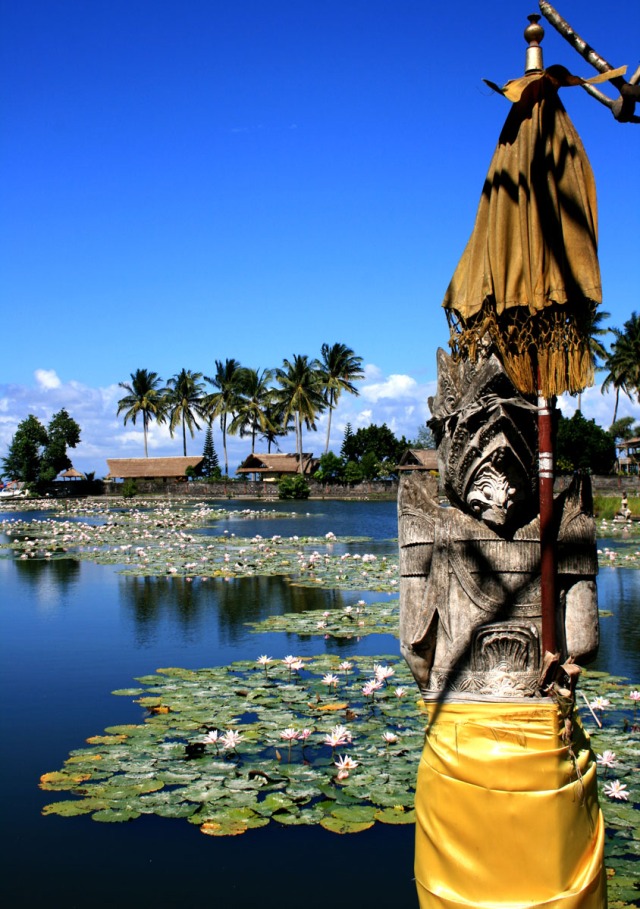 The ashram itself was situated between a large lagoon covered with water lilies and the Indian Ocean. Beautiful orchids brightened a small square between buildings. Near the ocean side, a long table was decorated with dangling palm leaves that had been intricately folded into something resembling a fish skeleton. The ashram ladies had prepared a festive vegetarian dinner with a multitude of familiar and unfamiliar foods: rice, vegetables, chutneys, sauces. 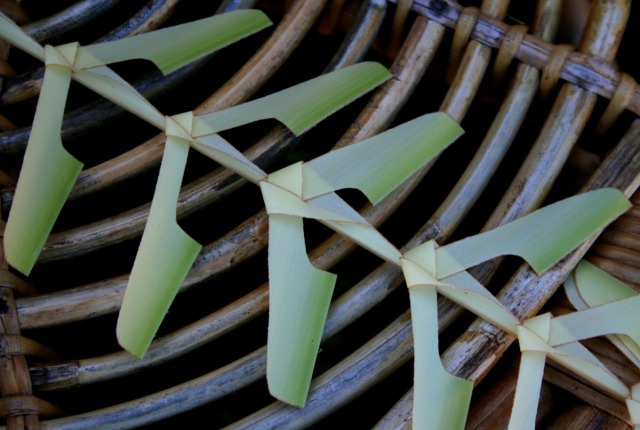 After dinner, the ashram women brought armloads of fabrics and sashes for the group to look at. The group had learned earlier in the day how to fashion a piece of fabric into a sarong. Anya bought a length of golden, silk-like fabric with subtle brown and green patterns embedded, along with a wispy white nylon sash that was called a temple scarf. A temple scarf is tied around the waist, over a blouse. Women were expected to wear traditional outfits into temples and other sacred sites. It looked like everyone bought at least one piece of fabric, in preparation for their upcoming temple visits. They walked home in the dark, shining their flashlights to avoid tripping on the uneven sidewalk.

Anya slept well but was wide awake around 3 am. She could tell that her roommate Marla was awake also. They started talking in the dark. Actually, Marla was doing most of the talking telling her life story – a long, arduous journey, full of hardship, disappointment, broken marriages and now faltering health. Marla added elaborate details about former husbands, adult children, a difficult boss. Anya tried to reciprocate, weaving in a bit of information about herself. But Marla quickly brought the conversation back to her own life story. Anya resigned herself to the role of listener. She sensed that Marla, as open and forthcoming as she appeared to be, seemed to get lost inside her own story. Just like an obese person puts on weight to grow a large buffer between themselves and the world, Marla seemed to wrap herself in layers and layers of words. While Marla created a superficial connection through telling her story, there was no true exchange here, only Marla’s monolog.
After about 45 minutes, Anya grew bored and told Marla she needed to get more sleep. Marla left the room, probably to sit on the oversized couch by the ocean where she might find someone else unable to sleep. Anya relaxed back into her pillow, relieved to have a few hours of solitude.

A blog about discovering beauty in all its ordinary and extraordinary manifestations.
View all posts by Beauty Along the Road →
This entry was posted in Three Weeks in Bali, Travel and tagged concepts of paradise, Gedong Gahdi ashram, lily pond, Mahatma Gandhi, Mrs. Gedong Bagoes Oka, palm leaf decorations, reef, snorkeling, yoga class. Bookmark the permalink.

11 Responses to Three Weeks in Bali: Snorkeling and Dinner at the Ashram