Posted on February 3, 2013 by Beauty Along the Road

With a sigh of relief, Anya settled into the backseat of the taxi. She had been traveling for more than 30 hours since she left her home in Virginia and her 54-year old body was begging for a real bed; not some airplane seat next to a 7-year old unaccompanied minor whose middle name was “spoiled brat” and who made it impossible for her to get any sleep on the first flight; not an uncomfortable seat in the layover airport, Seoul; not another airplane seat in the second plane, even if her new neighbor was a pleasant young Balinese man who taught her a few phrases of his mother tongue. No, she needed a clean, soft bed on which her weary body could stretch out and un-cramp all those muscles that had been holding her upright for way too long.
She anticipated that she would have difficulty traveling for such a long time. But when she first saw the announcement half a year earlier, “Come to Bali, join a group of women writing and exploring,” she knew she had to go. Could she have taken a vacation by herself on the same continent and saved herself the physical agony of such a long trip – of course. But Bali pulled her with an inexplicable, invisible rope. She didn’t even know herself what she was hoping to find there. Getting away from her emotionally demanding job as a therapist, from the financial stressors of a failed investment, from the never-ending demands of the growing season on her farm – these were the reasons she could quickly muster up sensing that the truth lay deeper, much deeper.
The taxi was taking her to the hotel, Lotus Bungalows, in Candidasa, on the South eastern coast of the island. This was where she would meet up with her writers’ group. Through half-closed eye lids, she noticed that there were fewer bright lights now and assumed that they had left the capital city, Denpasar, and its suburbs behind. What an exotic name, she thought and silently allowed the name to slide across her tongue: Den-pa-sar. It sounded promising, like an ancient destination seafarers would spin tales around after returning home. Many probably never came back. Either the ocean swallowed them or they fell in love with a beautiful woman from Bali and stayed.
What did SHE want from Bali? What was she looking for? What change, what inspiration? The landscape outside seemed otherworldly in the dark, she was floating close to sleep.
Finally, the driver pulled into a narrow driveway. Someone from the hotel came to carry her luggage and showed her the way to her room. She heard the ocean nearby but could not see it, only smell the salty, humid air.
When the door to her room opened, she was delighted to see the crisp white linens on the bed, royal blue pillows and a single yellow flower. There were two beds and her roommate had not yet arrived. She claimed the bed closest to the window. Then she spotted a platter of fresh fruit – pineapple slices, luscious papaya and juicy, red watermelon. She ate hungrily – her first nourishment created by Bali’s sun and soil.

Opening the door to the bathroom, Anya discovered an outdoor shower stall that had overhanging branches as an airy roof. A two-foot frog statue backlit by recessed lighting sported flowers on its head and at its feet, as if it, too, was divine and to be adored. She chuckled with pleasure about the unexpected bathroom luxury. 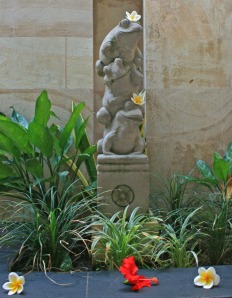 Slipping between the sheets of her bed, she felt pampered and slept well for what was left of the night. She awakened in the morning, refreshed, as if there was no 12-hour time difference. She was ready for her first day in Bali.
Stepping outside, she first noticed more of the yellow flowers that had decorated her room. The blossoms lay on the ground, moist with dew, as if the Gods had dropped them from the sky to soften her every step and offer her a glorious entrance into her first day on Bali. She brought one of the flowers closer to her eyes and nose – five petals in a creamy yellow cup shape that lured insects and hummingbirds to its inner sanctum with its delicate fragrance. An old man with tattered clothing was sweeping the garden path, sweeping those precious yellow flowers into a heap! When he noticed her, he stopped working, and said “selamat pagi”. She returned the good morning greeting, held up one of the flowers to him and asked “What are they?” He didn’t speak any English but understood her question. He called out “Frangipani, frangipani,” showering her with a beautiful, warm smile that made her feel as if she was his daughter who had returned home after a long trip abroad.
Anya looked around and realized that her cottage was at the end of a row of cottages in a well-groomed garden-like setting. There was a larger central building which she assumed was the restaurant and reception and she would soon find her way over there for her first breakfast in Bali.
The yellow flowers and their subtle scent reminded her to be soft, to slow her step, to slow her thoughts, and let herself be drawn to the ocean, just a few steps away. The heavy rhythm of the waves slapping on the beach reminded her strangely of where she lived, up in the mountains, far away from the ocean, and on the other side of the world. I live in a different kind of beauty, she thought, but I often forget to notice.
She walked past a swimming pool with clear blue water that seemed to drain down the cliff into the ocean. And just as she was preparing to climb the steps to the restaurant, she noticed a young Balinese woman carrying a shallow basket with her right hand over her shoulder. Barefoot, wearing a blue sarong and white blouse, she walked towards a pillar on the edge of the property and placed the basket on the ground in front of it. Then she placed some of the yellow, red and purple flowers on top of the pillar, added a small amount of rice, lit an incense stick and wafted the smoke with her right hand over her offering. Anya thought that she was praying, maybe asking for protection from the gods? 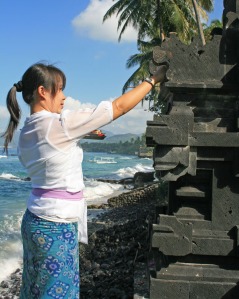 Anya was mesmerized by the gentle yet purposeful manner of this offering – the first of many she would witness during her time here. When the young woman continued to another place where she would repeat her offering, Anya stepped closer to the first pillar which she now recognized as a miniature temple. Inhaling the smoke swirling up from the incense, she sent a silent prayer of her own: “Teach me to walk in Beauty again.”
She had first learned about the “beauty way” in Navajo land just a few years before only to lose that path again. When she picked up the frangipani earlier, she sensed that she was picking up more than just flowers – she was picking up the path of beauty again.

A blog about discovering beauty in all its ordinary and extraordinary manifestations.
View all posts by Beauty Along the Road →
This entry was posted in Three Weeks in Bali, Travel and tagged Bali, beauty, beauty way, Candidasa, frangipani flowers, offering, Travel. Bookmark the permalink.