If there was a single thing Anya needed to see in Bali, it was the rice fields. She was able to see rice fields in different parts of Bali, all of them in various stages of cultivation. Strangely, the first rice field outside of Candidasa was at the very beginning of cultivation, with the watery beds just being prepared. And during her final rice field visit she saw dried up fields after the rice had been harvested. In between, she got to see lush green fields of young rice, the dried up golden stands of rice ready to be harvested, the actual harvest and drying of the rice, and then the fallow fields. She had not known how complex and labor-intensive it was to grow rice.

On her final day in Candidasa, Anya and two of her retreat colleagues arranged for another motor scooter excursion to some nearby rice fields. Despite their tour guide’s admonition that motor scooters suffered high mortality rates, they decided to take the risk. The rice fields were calling them!

When Komang and his two assistants showed up at the hotel, Anya immediately claimed Komang’s scooter. She wanted to ask questions and he was the only one who could carry on a conversation in English.

They drove through gently sloping fields and small villages. In the last village bordering the rice fields, the narrow country road turned into an extremely eroded path between the huts. The drivers prodded their scooters across the boulders that marked the path. The soil between the rocks had been washed away. Anya held on to her driver and the seat below her hoping that this would not be the time they’d slip. She told herself that they were going at such a slow speed, that even if they fell, at most there would be a few scrapes. You can’t die very easily going at 5 to 10 miles per hour!

After a nervous, teeth-clattering ride, they emerged at the other end of the village and walked past the final outpost of the village, a store and restaurant.

Store at edge of rice fields

An entire hill side of rice fields unfolded in front of them. As far as they could see, the terraces skipped from the top of the hill all the way down into the valley and up again on the other side.

There was a ditch with fast moving water to the left as they walked along the narrow foot path between the water channel and the top rice terrace. A woman was washing her laundry in the water at the edge of the village. She looked up at them and smiled shyly. 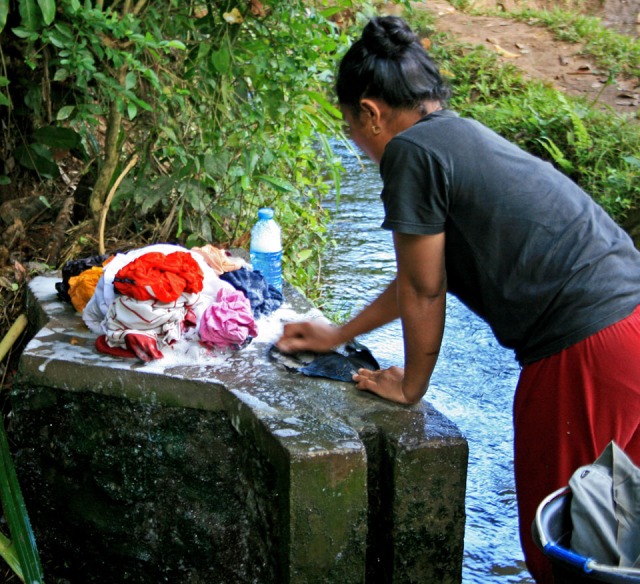 Several men hoed the grey muck in the top terraces which were flooded with water. A boy ran back and forth between them carrying plastic bottles of water. Suddenly, a voice rang up from the bottom of the valley: “Hello, hello, how are you? Hello, hello.” In the distance, far below them, they could barely make out a small boy who was waving to get their attention. They waved back.

As they walked along the water channel, Anya could see that there was no easy path along or between the terraces below them. One had to step gingerly on the bermed earth that held each terrace in place. It looked like it would take quite some effort climbing down and a misplaced step could easily land the inexperienced in wet, muddy terrain. In a few places scattered across the vast terraced landscape, people had built rudimentary lean-to shelters and allowed a few shrubs to grow around them to create an oasis of shade. 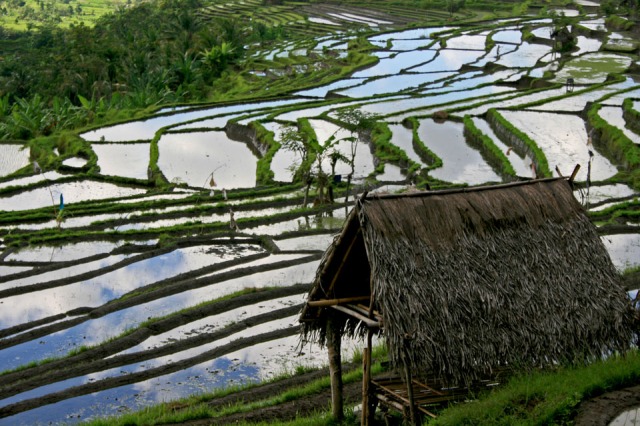 Very tall bamboo posts with a few shreds of faded fabric spiked into the air here and there. A few of the terraces held emerald green growth; those were the rice nurseries. When these seedlings were tall enough and when their permanent beds had been prepared, the seedlings would be transplanted into the watery terraces. Each seedling had to be planted by hand, at the right depth and distance from other plants. Each and every plant…. How many individual plants were there in this rice field alone? Hundreds of thousands? Millions? After transplanting, the seedlings had to receive the correct amount of water to thrive. And the amount of water would be tapered off until the rice fields dried out before the harvest.

Off to work in the fields 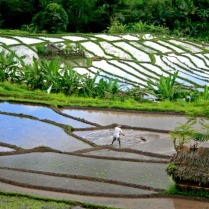 In the distance, a volcano shrouded in clouds stood like a silent guardian over these ancient rice fields where people had been growing their daily staple for hundreds of years.

Volcano in the distance

Even the irrigation schedule, Komang told them, was developed in ancient times. Each individual rice farmer and each village who owned part of the rice terraces had a specified time each growing season when they would receive their irrigation water. The water was channeled through inlets into their terraces that could be opened and closed as needed. Each year, two rice crops were grown. Komang shared that one year, the village authorities decided to change the ancient irrigation schedule. It caused big problems and planting and harvesting were thrown off schedule. After that “modernization” attempt, they went back to the proven method. 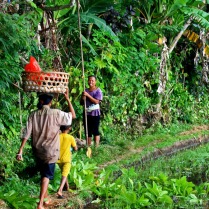 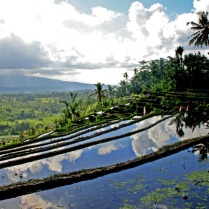 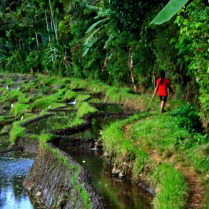 Anya knew that farming the same area with a single crop eventually depleted the soil. However, this system has been highly effective over centuries – people knew how to replenish the soil with animal manure and who knows what other secrets to keep it producing over and over again. Maybe the corn and soybean farmers in the Mid-Western states of the US could learn some lessons from Bali’s rice farmers?

The rice terrace strangely reminded her of the vineyards of her hometown in Germany. The vineyards, too, were grown on steep hills enclosing her small town on three sides. And that land had been producing the same crop since the time the Romans first taught the conquered Teutonic barbarians to grow grapes for wine. On her mother’s side, there had been many generations of vineyard farmers. She had come across an old picture that must have been taken towards the end of World War II. Her mother was a 9- or 10-year old girl and her grandmother a vibrant, determined looking woman. They were surrounded by other family members and neighbors who helped bring in the grape harvest. Her grandfather was absent, either still in the war or recuperating in the hospital from his war wounds. Her mother’s apron had some dark stains on it, probably from the grape juice that had run down her chin after stuffing the sweet fruit into her mouth. Everybody’s clothing was tattered and mended in places. Clearly, the war had forced them to use each piece of clothing for as long as possible before it was turned into cleaning rags.

Anya imagined how the rice harvest would also be a communal event, though much hotter and less juicy than a grape harvest. She would later have the opportunity to see women harvesting rice in Northern Bali.

When the other two women had spread out along the path to take pictures, Anya and Komang were standing side by side, silently looking over this vast landscape that would bear the rice crop for the region. Anya asked him about his family – he was married but they decided to postpone having children until they had saved up some money. He was the only one in his family who spoke English because he was interested in meeting new people and communicating with them.
When Anya asked to take his picture, he commented that he was ugly.
“Why do you say that?” she asked him, puzzled. He was a pleasant looking fellow, even handsome.
“Because, here in Bali, dark skin is ugly. Light skin more beautiful.” he explained.
Anya’s innards contracted and she thought about the bitter fruit of colonialism dark-skinned people all over the world had inherited. She sent out a silent curse into the universe meant for the Dutch who had conquered this part of the world and brutalized its inhabitants. But she knew that many other people had done the same in different parts of the world – the British and Portuguese in Africa, the British and Spaniards in the Americas, the Europeans in Australia. When would these wounds be finally healed?
She looked Komang in the eye and said slowly and earnestly: “I think dark skin is as beautiful or more beautiful than light skin.” He nodded slightly and then allowed her to take a picture of him overlooking the terraces.

On their way back to the hotel, they saw rice spread on straw mats laid across the road. An old woman stepped on the rice and spread it with her feet so it could dry evenly in the sun. Motor scooters and cars drove over the rice – there was no way to avoid it. Anya made a mental note to always wash her rice very carefully in the future.

They saw fields of blooming shrubs – purple, pink and red flowers which Komang told her were grown for temple offerings. A small tribe of grey monkeys loitered near a temple site, waiting for an opportunity to grab a meal from the food offerings made there. In another location, a low corral across a small stream held in several dozen ducks, a tiny duck farm.

They stopped by a village market wandering between stalls abundantly laden with vegetables – eggplant, cucumbers, cabbage, bitter gourd, sweet potatoes, cassava, taro and other unfamiliar tubers, a variety of greens, equally unfamiliar, and jack fruit. They had their first taste of this huge, spiky green fruit which was the size of a watermelon and looked like it belonged back into the dinosaur era. The yellow flesh was a bit rubbery and not nearly as juicy as watermelon, but pleasant tasting.

When they returned to their hotel, it was time to settle the bill and pack for the next phase of their stay in Bali. Tomorrow, they would leave for Ubud, the arts and crafts capital.