When you walk out of your house in the morning and see this in your driveway,

the first thought would be “rattle snake” and “danger.”

Upon closer inspection, however, there was no rattle at the end of the tail.

As close as we got to it, a rattle snake would have begun to warn us with vigorous rattling sounds. This snake just curled up and seemed more interested in warming itself in the morning sun and possibly digesting a small animal, from the small bulge in its body. Also, the shape of its head was different from the more triangular shape of a rattlesnake’s head. 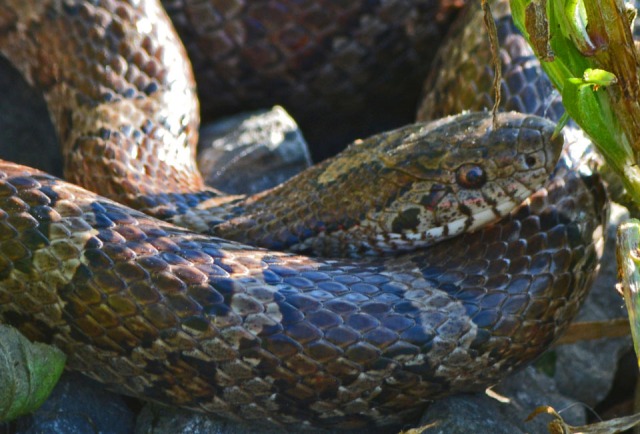 A bit of research turned up an ID – a corn snake, or maybe a Northern water snake, not poisonous, not dangerous.

Phew! It got to live…

Another animal that got lucky today was this wild rabbit which I trapped in my garden.

I had noticed that my strawberry leaves were disappearing and then saw not one but two rabbits in the garden. It took a few days before one of them was tempted by the carrots in the cage. Now what to do with it? Rabbit meat tastes good but who wants to go through the slaughtering process? So, it was catch and release for this lucky rabbit.

out of the cage

I was happy to see it disappear into the wilderness, hopefully far enough away from my garden that it won’t return!

PS – after a bit of a debate among Facebook friends, I consulted with the Virginia Herpetological Society who identified “my” snake as a harmless milk snake.

A blog about discovering beauty in all its ordinary and extraordinary manifestations.
View all posts by Beauty Along the Road →
This entry was posted in Animals and Critters, Appalachia, Weekly Photo Challenge and tagged another chance, careful study, confusion, corn snake, danger, destructive, freedom, identification, live and let live, rabbit, releasing, snake, trapping, weekly photo challenge: spare. Bookmark the permalink.

39 Responses to Spare me…