Resistance and Re-Purposing our Lives

Posted on February 2, 2017 by Beauty Along the Road

I cannot remember the last time I participated in a demonstration – before the Women’s March in Washington, DC, that is. It must have been decades ago. What is it that drove me and millions of others (women AND men) to ignite this new resistance movement? And how to understand that concept: to resist?

The dictionary tells us that resisting is about withstanding the action or effect of some other force; it is about opposing or striving against, to take a stand against. Synonyms include confronting, counteracting, and rebuffing.

I resisted the idea of including this overtly political post into my blog for over a week, torn about whether it actually fits with the mission and purpose of my blog. Four years ago, I declared on my About page:

This blog is dedicated to the discovery of beauty in all its ordinary and extraordinary manifestations. May we all learn to become more present with what is inside of us and around us, the subtle nuances of experience, the savoring of simple pleasures, and the celebration of what makes us unique and life worth living.

Participating in the Women’s March in DC was an extraordinary experience – to witness and feel in my body the cohesiveness and solidarity of a huge crowd made up of people of all ages, religions, races, sexual identity. We marched as one, we cheered as one and booed as one. Where else in our day-to-day lives can we experience the power of a united humanity? When was the last time I felt so viscerally connected to such a large body of people? – this was the beauty of human connection and solidarity in its extraordinary manifestation. The values advocated by this crowd of people ranged across reproductive rights, immigrant rights, inmate rights, religious choice, equal pay, earth justice, and many more. These shared values are what “makes us unique and life worth living” as a multi-cultural society.

Like millions of other people, I have been engaged in resistant acts in the last few weeks – contacting politicians to oppose the selection of unfit, unethical, conflict-of-interest ridden individuals for key positions in our new administration; spreading relevant information through social media; joining local groups of people interested in making a difference. 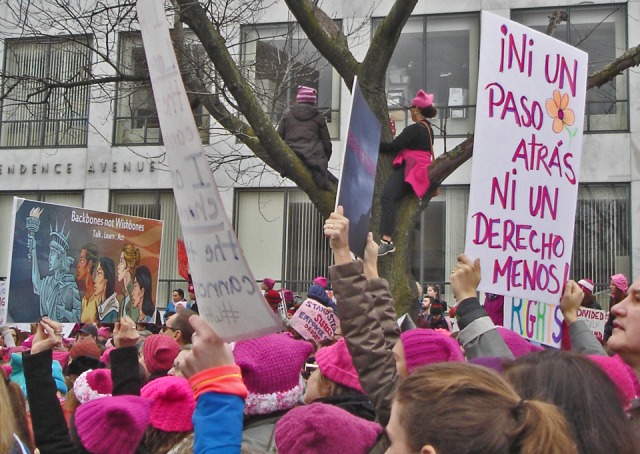 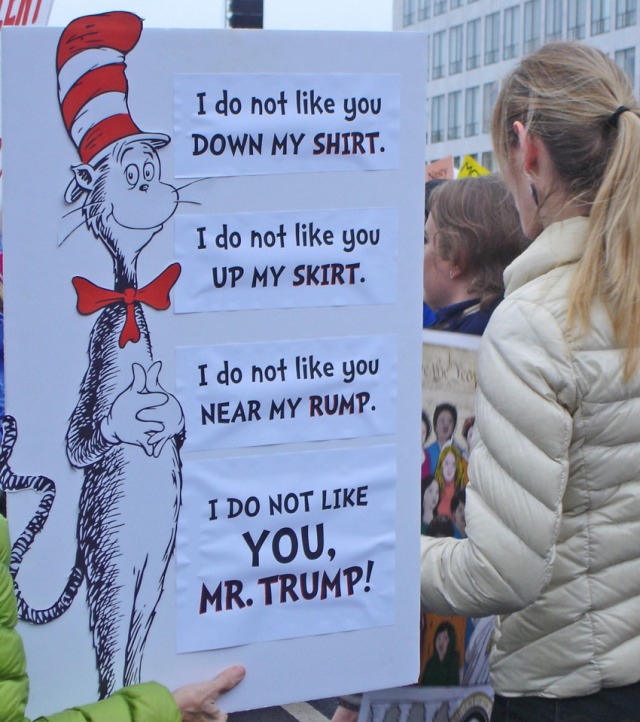 I thought of all the resistance movements and resistance symbols I have seen in my own lifetime. This anti-nuke pin has survived four decades that included cross-continental moves. The pin symbolizes the beginnings of my political activism in my teens, in Germany. It shows a nuclear reactor with the word “nein” written across it (the word “no” in German). 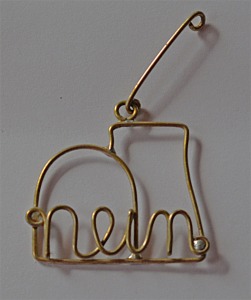 Of course there are many more symbols of resistance: Mao, Che Guevara, Steve Biko, Nelson Mandela, the keffiyeh (Palestinian black and white scarf), Black Panther berets and raised fists, coat hangers for illegal and dangerous abortions, and, most recently, images of Native Americans braving militarized police who defend the interests of pipeline companies.

How I see the current situation: the fire alarms have gone off, we have a fire emergency and the fire needs to be put out to prevent massive damage to our democratic structure and social system. So I will help carry water and try to douse the fire in whichever way I can – taking a stand and dedicating a substantial part of my life (re-purposing my life) to political activities.

However, I am interested in more than merely putting out a fire. I want to understand the underlying reasons that caused this fire and I want to assure that the remaining structure (our democracy) becomes more fire resistant. Some people are arguing that we need the fire to burn down what is not serving the people, that the fire has been smoldering underground, regardless of what political leanings the inhabitants espouse.

I don’t want to merely follow some group’s five-point program to engage in resistance – although that is valuable, important, and gives us a sense that we are actually DOING something. I want to re-read writings of the resistance movements of the past and understand the underlying principles, gleaning from the freedom fights of the past what might work for our contemporary struggle to regain true democracy (did it ever exist?).

In my mind, the end goal of this resistance movement is not to replace the Republicans with Democrats again. Politicians from both parties have been bought by the large banks and multi-national corporations and are unlikely to truly represent their constituents with the obligations engendered by so much corporate money. As much as I liked our previous president as a person, wars continued under his administration, drones killed innocent civilians, citizen surveillance was expanded rather than discontinued, the bankers who caused the economic crash of 2007/08 were never held accountable, police profiling and brutality against African Americans escalated, the upper one-percenters continued to reign and vacuum up even more of the wealth of the middle classes, government expenditures continued to increase to dangerous deficit levels.

Furthermore, we need to educate ourselves about the true nature and insidious power of the Federal Reserve System, which is a private banking cartel, not a government institution. We need to investigate and expose the behind-the-scene and difficult-to-follow machinations of the Federal Reserve that enable the crushing stranglehold of corporations over our political apparatus. When we start a movement to separate politicians from corporate money, we may have a chance at a functioning democracy again.

I was inspired by Amanda Witt’s passionate speech at the DC Women’s March. She left us with the question: “What will YOU do with your fire?”

A blog about discovering beauty in all its ordinary and extraordinary manifestations.
View all posts by Beauty Along the Road →
This entry was posted in Daily Prompt, Healing Ourselves and the Planet, Weekly Photo Challenge and tagged corporate power, Daily prompt, democracy, Federal Reserve, fire, fire alarm, opposition, repurpose, resist, resistance, standing up, taking a stand, Women's march. Bookmark the permalink.

37 Responses to Resistance and Re-Purposing our Lives