I like finding a praying mantis in my garden – such composure, elegance, even cuteness. Just look at that dainty, triangular face and those huge composite eyes.

This one climbed up a solar panel (can you see one of its legs partially missing?):

However, on closer inspection, they look very scary – sort of like the inspiration for a horror movie about irradiated insects that grow larger than humans.
Look at those massive mandibles!
I apologize for the quality of these close-ups – they were taken with my old camera. But it gives you an idea… 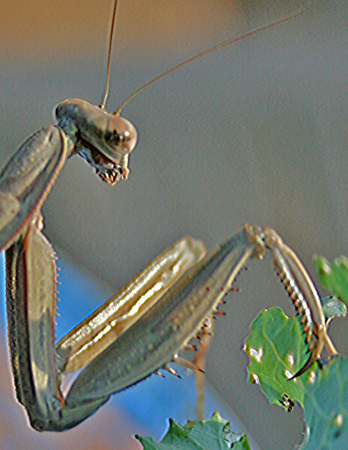 Mantises (in the Mantodea order of insects that contains over 2,400 species) live in temperate and tropical habitats; their closest relatives are cockroaches and termites. They can live up to one year.
Females have been observed eating their mate after copulation, a habit also known as sexual cannibalism.
After mating, the female lays her eggs in a frothy mass produced by abdominal glands. The froth then hardens around the eggs into a protective capsule. The capsule and the egg mass is called an ootheca. I have found oothecas wrapped around the woody stems of raspberry canes and forsythia bushes. 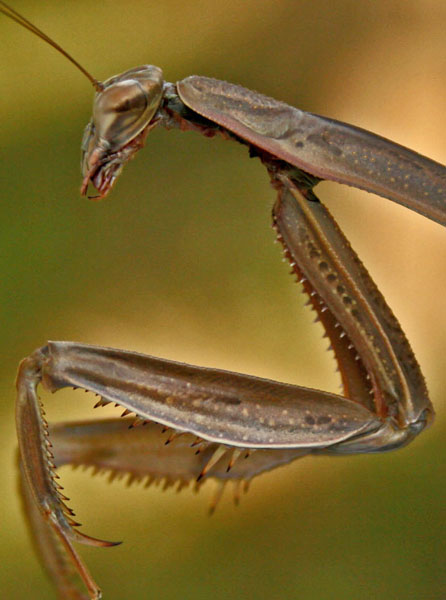 Praying Mantises typically prey on other insects often holding still for long periods of time until dinner arrives. They snatch their prey with their long forelegs, hold it in a deadly embrace and begin eating its head first. The forelegs are equipped with spiny protrusions that make it easy to trap prey and prevent it from escaping.

I think I prefer to look at them from a respectable distance: