Stepping Back into the Past (1): English Farmhouse

The Frontier Culture Museum in Staunton, Virginia, is a unique place to witness living history. It holds original buildings (or reconstructions) from those cultures from which the early Shenandoah Valley settlers came: English, Scots-Irish, German, Igbo (Nigerian), and Ganatastwi (Native American). Several American structures from different time periods are composites derived from the buildings found in the settlers’ home countries.

I’ll highlight the English Farm in this post, then hopefully get around to each of the other cultures in future posts. Because the Weekly WordPress Photo Theme is Orange, I have focused on those images that contain at least a speck of the orange color spectrum.

This English house from the 1600s originally came from the town of Hartlebury, located in Worcestershire, England. It was taken apart, shipped across the Atlantic and painstakingly rebuilt on Virginia soil. Here is the two-story structure built with large timbers and wattle and daub as wall fill-in. The pink-orange exterior of this building really draws your attention in the predominantly green landscape.

Some of the walls were in need of repair and showed the underlying orange daub, probably a mixture of soil and sand:

Wall in need of repair

Inside I was greeted by this young woman in clothing typical of 1600s England (she may have been a servant). During another visit, I met this lady in a much more elegant outfit and a gentleman with a distinct preference for orange and black:

I’ll give a very brief historical overview to put this in context:

Virginia was England’s first North American colony, beginning with the founding of Jamestown in 1607. Close to 120,000 English migrants arrived here in the 1600s. Some colonists were granted land which they turned into tobacco plantations with the help (or should I say blood, sweat and tears) of white indentured servants and African slaves. Settlement slowly crept westward into the piedmont area of Virginia. By the mid-1700s, Anglo-Virginians crossed the Blue Ridge Mountains and began to settle in the Valley of Virginia, also known as the Shenandoah Valley.
By 1700, almost 250,000 people, most of whom were born in England or were of English descent, lived in the colonies.
The large majority of these English settlers were tenant farmers and farm laborers in England. About a quarter of the colony’s English people were members of the lesser gentry, merchants, yeomen, and professionals with university education.

The English farmhouse above would have been owned by a prosperous farmer, a yeoman.

A yeoman’s house included furnishings and implements that displayed the wealth of the family: pewter and silver items, tables, chairs and cupboards. Here is the living room with a long table to seat a large family. The large chair at the far end of the table (with blue pillow), an elaborately carved armchair, would have been the man of the house’s throne. The wife and children sat on simple benches or stools. The table at the moment was used for carding wool (cleaning the raw wool with the combs to get it ready for spinning).

The bedroom also displayed the relative wealth of the yeoman family. The bedstead contained mattresses and feather pillows and was framed by expensive woolen bed curtains and valences.

The children’s beds were much simpler:

The most important room of the house was, of course, the kitchen where most of the household activities took place – cooking, cheese and butter making, baking. The water needed during the course of the day was lined up in wooden containers under the window. Any given day, you might have found a thick stew, meat pies, roasted, fried, or grilled chicken, beef or lamb dishes here for dinner. The housewife oversaw the kitchen activities along with vegetable and medicinal herb production in the nearby kitchen garden.

fresh cheeses on the kitchen table 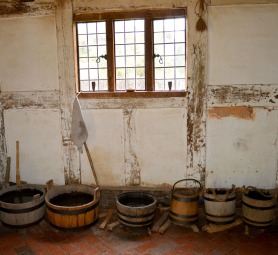 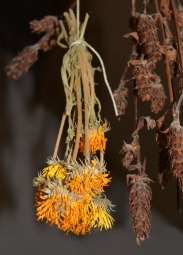 29 Responses to Stepping Back into the Past (1): English Farmhouse