Two months ago, I wrote about a challenge I gave myself:   1. to minimize the number of throw-away cups (and those single-use plastic covers they come with) when I buy coffee and   2. to maximize the use of re-usable cloth shopping bags.

This is what happened during the last two months:

I used throw-away cups on only two occasions, once because I forgot to bring my travel mug along, the other time for sheer convenience.

I went on a long 1,100-mile car trip and was away from home for two weeks. During that time, my travel mug was my constant companion.  By now, it has become a habit for me to carry my travel mug along.  So this is not a challenge anymore.

During the last two months, I forgot to take my re-usable shopping bags a few times, but basically it, too, has become a habit to bring my fabric bags and a cooler bag that keeps perishables cold.

I am ready to move on to a bigger challenge:  to reduce our household’s throw-away garbage by 50 percent over the next 4 months.  At this point, we are filling a large trash can over a period of about two months (I used to fill a similar-size trash can during a single week while living in the suburbs of DC).  I noticed that we are mostly throwing away plastics that cannot be recycled.  Everything else either gets recycled, up-cycled, or burned in the wood stove.  All food wastes either go to the chickens, dogs, and cats, or end up in the compost pile.  When I was away on my trip, it felt very strange to throw food wastes into a plastic bag along with other trash.  It just didn’t belong there, in my mind.

Some of you may know about the Great Pacific Garbage Patch, a gyre in the Pacific Ocean that is twice the size of the state of Texas, or the country of France.  This gyre accumulates trash from all the countries that border the Pacific ocean, both in the East and the West.  The most troublesome aspect of this phenomenon is the fact that plastics have broken down into smaller and smaller pieces and have turned the ocean into a plastics soup.  Fish and sea birds consume these plastic fragments mistaking them for food.  Many die of the plastic waste in their stomachs.  But it doesn’t stop there.  Researchers have found that the plastic molecules the animals consume end up in their blood stream.  When we consume fish and other seafood, the plastics then end up in our own bodies and cause an endless array of problems that we are only beginning to correlate with plastic consumption.  For example, plastics in our bodies function as hormonal disruptors and speed up the growth of cancer cells.

So, throwing anything into a garbage bin is not a very responsible solution.  Even when the plastics end up in a landfill (and not our waterways and then the big ocean), they can still leach into the soil and groundwater, and ultimately end up in our bodies.  There is no more “away.”  Our throw-away habits are not only poisoning our environment and the animals, but, ultimately, our own bodies.  Everything is interconnected.

The only way to change this ugly travesty is to reduce our plastic consumption in the first place.  Don’t buy it, if you can avoid it.  Ask for less or no packaging, and products in glass bottles instead of plastic bottles.  Bring your own containers.

If you want to see what we have created with our consumption and throw-away patterns, you can watch this short video or a longer documentary.  It is truly mind-boggling.

While there are beginning efforts to clean up the oceans (see Eco Element’s blogpost on an invention by a creative young man), we each have to make an effort to stop poisoning ourselves and the world we live in.

Some people manage to produce virtually no trash.  Check out this young woman in New York City  or the book by Bea Johnson, Zero Waste Home.  Bea has done a tremendous amount of research and has drastically reduced the amount of waste in her 4-person household.

My goal is to be part of the solution by creating awareness within myself and others, and taking action where I do have  choices in my consumption patterns.  Even though we are already creating much less waste than the average American household, I want to cut back to a bare minimum.  It will be an interesting journey, I am sure.

To the next seven generations who surely will want to swim in a clean ocean. 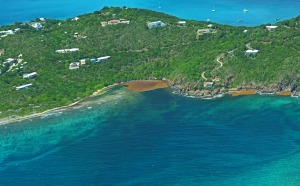 Coincidentally (?), Anarette just published a post sharing her experience of swimming with whales.  She also mentions the gigantic garbage patch the oceans have become threatening the very survival of these magnificent animals (along with all the others who depend on the oceans).

A blog about discovering beauty in all its ordinary and extraordinary manifestations.
View all posts by Beauty Along the Road →
This entry was posted in Healing Ourselves and the Planet and tagged dangers of plastics, environmental pollution, environmental protection, garbage, Great Pacific Garbage Patch, minimizing waste, ocean gyre, plastic soup, single-use plastic, throw-away, zero waste. Bookmark the permalink.