A monument is something of lasting value and significance and often defines a city (e.g. the Washington Memorial), or sometimes even a country (e.g. the Statue of Liberty). In addition, there are monuments to historical characters, sports and entertainment figures, religious leaders and saints, war memorials, ruins of ancient temples and other structures (the Coliseum in Rome, the pyramids in Egypt and Central America). Entire facilities have been turned into monuments such as the Dachau concentration camp in Germany or South Africa’s Robben Island prison that held Nelson Mandela captive.

I chose a more light-hearted theme for my monument collection: animals. Here is a selection of monuments to animals from the National Zoo in Washington, DC.

Not surprisingly, a regal lion welcomes people at the main entrance to the Zoo. He IS the king of the animal kingdom. Of course, if dinosaurs were still around, they could easily trump the lion as top predator. Alas, they are history and we can only shudder looking at the huge skull with its large and sharp teeth. Monkeys are favorite characters, perhaps because they remind us of ourselves?

I also liked this mural at the Zoo, another monument to the many animals that enliven and enrich our world. 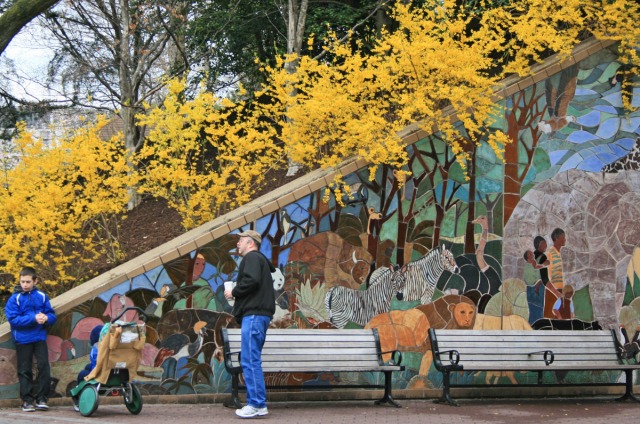 In the Outer Banks of North Carolina, I enjoyed these horse monuments that honor the wild horses still wandering free along the beaches.

The Mermaid horse does need a bit of restoration as part of her shell bra has either been stolen or fell off.

I will close with this thoughtful sculpture from a church yard in Charleston, South Carolina. It is a monument to the slaves who helped build the church (so, technically, it’s NOT a monument to an animal but only uses the symbolism of the bird to honor the people who worked so hard to create a place of worship, for a religion that did not even acknowledge them as full human beings).

Learning from the past in order to move forward….

This post has been created in response to the Weekly Photo Challenge: Monument.

3 Responses to Monuments to Animals