Just when you think that winter has frayed your last nerve and spring still seems a distant dream, Mother Nature is quietly working her magic. When the nights are still freezing but the days are starting to warm a bit, the trees begin to draw up moisture from the ground. Nobody really knows when humans first discovered that tree sap was flowing during that particular time of year, then realized that this sap could be collected and boiled down into a delicious syrup. Native Americans were no strangers to tree syrup which can be produced from birch, walnut, and maple trees though maple syrup is the most popular.

Canada and New England are the best known and most prolific maple syrup producers. Highland County, Virginia, due to its unique mountain climate, is the southernmost location in the US where maple syrup can still be produced.

In Highland County, there are only 6 or 7 sugar camps that are open to the public during Maple Festival in March. However, there are many more families who own a “sugar bush” (a grove of maple trees) and produce maple syrup for their personal use.

Usually, by early February, the tree sap is rising, and buckets and plastic piping are being rigged to thousands of maple trees to gather the precious water. Depending on the weather, tree water can be collected over a period of 4 to 6 weeks before the trees begin to bud and the water takes on an unpleasant taste.

Maple syrup making is a labor intensive process: First the trees have to be “tapped”- small holes are drilled into the bark, then a tap or a spile is inserted into the tree trunk. Spiles used to be carved out of wood, then were crafted from cast iron and aluminum, and now, plastic. Sometimes, the sap flows out of the spile as soon as it is inserted, so you better have something handy that will collect it. You can attach a bucket to the spile, or plastic piping that guides the water downhill into a large holding tank. 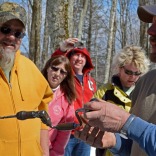 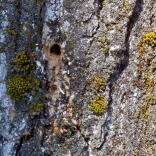 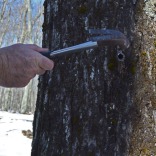 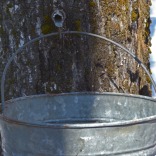 At Back Creek Farms, Valerie and Pat Lowry use both buckets and plastic piping that funnel maple water into large vats. 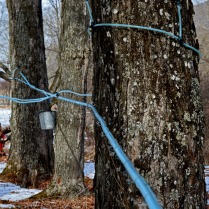 Pat drives his truck to the large vats and pumps the precious tree sap into a container on the back of his truck; then transports it to his sugar camp where the water is transferred to various containers, including a reverse osmosis tank that increases the 2% sugar concentration to a 4% solution. From there, the water is pumped into a large wood-fired pan where it is boiled down into sweet, thick syrup over a 24-hour period. That’s the old-fashioned way.

With a nod towards modernization, the Lowry’s also own a huge, shiny evaporating machine that speeds up the syrup-making process considerably. As you can imagine, there is a subtle difference in taste between the syrup created in small batches in the slow wood-fired pan process versus a much larger amount produced more quickly in the evaporator. However, when the trees “run” vast quantities of water, the evaporator which works four times as quickly as the open-pan method, comes in handy. The tree water cannot be stored for very long before it turns sour. 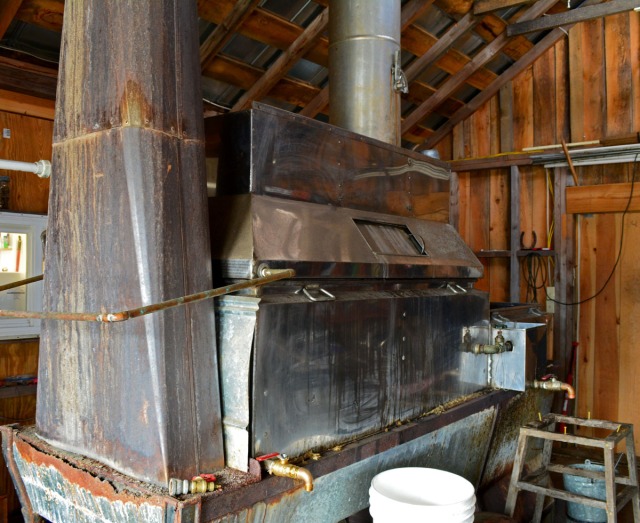 At the Laurel Fork Sapsuckers Sugar Camp owned by the Moyers family, a vast network of plastic pipes connecting hundreds of trees collects the sugar water in a huge storage container outside their sugar house.

Once the sugar water is inside the sugar house, the boiling down process begins: 40 gallons of tree sap bubble down into 1 gallon of maple syrup. It’s a slow process that takes a lot of fire wood, time and patience.

At Back Creek Farms, Pat and Valerie take turns watching the bubbling pan, listening to the sounds, re-arranging the wood to create the right amount of heat. The pan is at least 130 years old, possibly older. Pat explained that it has been in his family for several generations. Watching the sugar water turn into delicious maple syrup is both an art and a science. He uses a hydrometer to determine the proper consistency. You can’t fall asleep or get distracted by neighbors or else the syrup can transform into hard candy crust that’s very difficult to remove from the pan. Pat said in all his years of syrup making, it has only happened once. But he’ll never forget the amount of time and elbow grease it took to clean up afterwards.

The delicious end product of this traditional food craft is a rich syrup that varies in color from a honeyed amber to a dark molasses. The darker the color, the richer the taste.

Maple syrup can be further processed into maple sugar (a rich brown sugar), maple fudge or maple candy. It is also used to flavor a variety of products such as granola, cakes, meats, ice cream, milk shakes, even coffee!

So when you pick up a jar of real maple syrup at the grocery store, you may want to send out a thought of appreciation to all the hard-working people who labor in the woods and sugar camps to create this delicious food product for you. It truly is a labor of love.

I would like to thank Pat and Valerie Lowry for taking out time to introduce me to their sugar house as well as the Moyers family who entertained and informed a large group of visitors on Maple Festival Saturday. Both families are deeply committed to this traditional form of food production.

31 Responses to Inside the Maple Sugar Camps: Sweet Winter Harvest